In Live Casino Hold’em manufactured by Playtech, the player must collect the best 5-card combination, using two cards dealt by the dealer and five common cards on the table. The game is played with a deck of 52 cards which are shuffled after each deal. Instead of playing against one another, casino clients play against the house represented by the dealer. 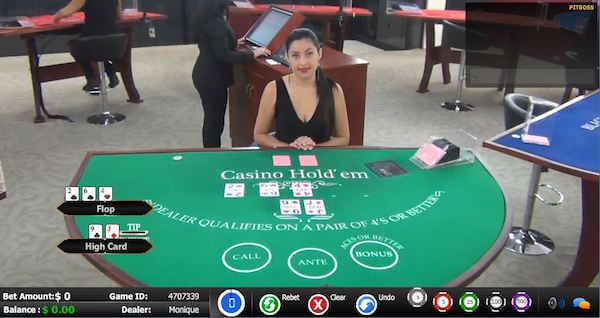 Payouts for the initial bet:

Players can make an additional bet in the field АА. The bet wins if in the first five cards (flop and pocket cards) the dealer deals the combination of two Aces or higher. This bet is paid regardless of the main result:

How to Play at Live Casino Hold’em from Playtech

Before staring to play at Live Casino Hold’em produced by Playtech, you should select a table from the list. The player chooses nominal value of chips to make his bets and clicks on the field Initial Bet. He can also bet on the Field AA. Then you must confirm your bets by pressing on the respective button.

The dealer deals two cards to himself and the player. All Casino Hold’em players play for the common box but they can see their own bets only. Then the dealer deals the flop– three common cards. Based on evaluation of his cards, the players makes one of the two possible decisions: make a bet on the field Play (this bet is twice as high as the Initial Bet) or discard all cards and lose ante.

Then the dealer adds another two cards (Turn and River) to a flop. Computer determines the strongest combination and makes a payout, if the player won.

The range of bets may differ between casinos offering Live Casino Hold’em from Playtech. At Betway Casino, the initial bet varies from $5 to $50, while the bet on the field AA - from $2 to $100.

If connection is lost right after the player has made a bet, he is redirected to the game version with the random number generator. When the player enters the casino again, he can keep playing that version of the game.